MultiServ will start a major new 10-year contract next September working at a brand new Arcelor stainless steel mill in Belgium. Currently under construction, the Carinox site will have the capacity to produce one million tons of stainless steel. MultiServ will provide scrap yard management, slag pot carrying, and slab logistics services. MultiServ will also be responsible for operating and maintaining the customer’s four slab grinding machines.

Arcelor, the world’s largest steelmaker, is restructuring its stainless steel division and concentrating production in Belgium. The new Carinox meltshop will adjoin Arcelor’s existing Carlam site, which undertakes the hot rolling of slabs produced by other sites within the group. The process for MultiServ securing the contract started in September 2002, when Arcelor began investigating the possibility of constructing a new meltshop in Belgium. Due to MultiServ’s extensive experience in the stainless steel sector,we assisted Arcelor during the six-month feasibility stage with technical support relating to the main areas to be outsourced. This technical assistance was led by Philippe Bruyère. 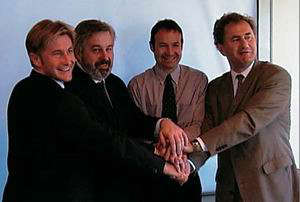 Following completion of the technical feasibility studies, the Carinox project was approved by Arcelor’s board in August 2003. In October 2003, Arcelor released their official tender for the outsourced service package. At this point, MultiServ assembled a project team led by Bruyère. Working with technical specialists from MultiServ’s Europe South region and the Divisional Office in Leatherhead, bid documents were assembled and submitted to Arcelor. Arcelor subsequently completed benchmarking and technical assessment of the various bids and short-listed two candidates, including MultiServ. The final two bidders then entered into intensive commercial and contractual negotiations over 48 hours.

With continuous support from Harsco, MultiServ was able to successfully secure the contract. This is a significant step for MultiServ in extending its partnership with Arcelor in Europe. In addition to performing its own responsibilities, MultiServ is working in partnership with other specialist companies who will undertake the stainless steel metal recovery and slag commercialization services for Arcelor. “The easy part is now over and we face the challenge of turning our proposal into reality,” says Luc de Clerk, who has been appointed project director, with Philippe Bruyère maintaining his key involvement as lead project engineer.

They will receive support from regional and divisional technical and human resource specialists. Winning the Carinox contract reflects Arcelor’s confidence in MultiServ to deliver complex and critical mill services. By applying our knowledge and experience and working in partnership with our customers, MultiServ has been able to secure a significant contract and successfully meet the customer’s increasingly demanding requirements.