Port Hawkesbury, Nova Scotia (August, 2005) – ECI-USA and Nova Scotia Power (NSPI), together with Montreal-based Savage CANAC Corporation (Savage) and CBCL have succesfully commissioned the impressive 2000-series E-Crane on the dock at the Point Tupper Marine Terminal. The final commissioning and acceptance tests for this E-Crane were done during the unloading of 80.000 tons of coal out of the the Panamax vessel ‘Salvatore Caffiero’.

NSPI (Phillip, Graeme and their team), CBCL (Dan and Randy with their team), Savage (Rick and his team)… thanks very much for all the efforts and positive influence. It means a great deal to everyone at E-Crane on an important project like this… Also thanks and congratulations to all the talented employees at Indusign! Great Job!

NSPI started building the marine terminal in 2004. It allows access to coal supplies around the globe including low sulphur coal from basins including Russia and South Africa. Accessing this coal is one way NSPI will meet new provincial air emission requirements, which includes lower sulphur dioxide, oxides of nitrogen and mercury. NSPI invested 34 million $ in this new marine terminal. That translates to lower transportation and commodity costs.

The Point Tupper Marine Terminal, at the Strait of Canso, also offers important strategic advantages. It is located directly on the shipping route between North America and Europe. It is also the deepest ice-free harbour in North America, allowing ultra large vessels carrying a variety of bulk cargo products. In addition to supplying coal to the Point Tupper and Trenton Generating Stations, the Terminal will have additional capacity for other products and is able to service various types and sizes of vessels including belted, self-loading and bulker type vessels. The E-Crane on the dock is designed to offload Panamax size vessels using a 23 m3 hydarulic coal grab. When offloading these Panamax vessels with 50 to 70 second cycles, offloading rates of more the 1000 tons/hr ‘through hatch’ are achieved. 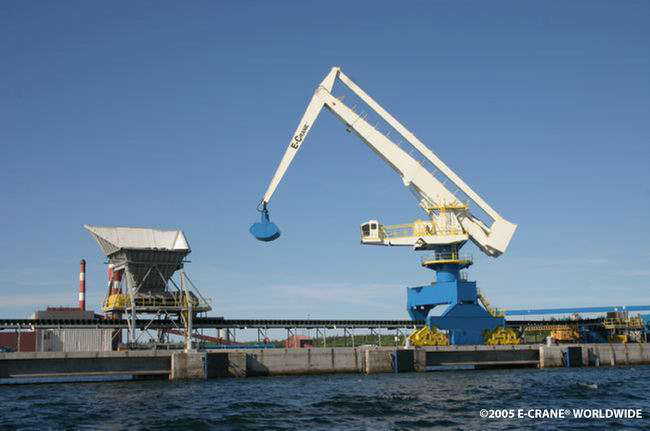