The E-Crane is ideal for bulk handling applications that require heavy-duty production cycles. Recently, the E-Crane has proven to be a top solution for grain handling operations all around the world, particularly in South America. In 2013 and 2014, many companies chose the E-Crane as the solution to their grain handling needs. In 2013, E-Crane installed and commissioned a 1500 Series/ Model 11264 PD-E pedestal mounted E-Crane to unload soyabeans and grain from Mississippi and Paraná-sized barges at Terminal 6 S.A. in Argentina. The E-Crane is dock mounted, and has a 26.4 m (86.5ft) outreach and a duty cycle capacity of 16.5 metric tonnes (18.2 US tons). The E-Crane transfers the grain from the barges to a hopper and conveyor system on the dock with a 13.5m3 hydraulic clamshell bucket. Terminal 6 S.A. chose the E-Crane after realizing the many benefits of the equilibrated crane’s efficient design. The goal was to increase the productivity and capacity of the port. The material was originally unloaded using a cable crane and a small material handler, with each machine achieving a production rate of about 400tph (tonnes per hour). The new E-Crane replaced the old cable crane and achieves a much higher production rate than the previous set-up.

After the successful operation at Terminal 6 S.A., another Argentinian company realized the benefits of the E-Crane for grain handling purposes. In early 2014, an identical 1500 Series/ Model 11264 PD-E pedestal mounted E-Crane was purchased for a very similar operation. This E-Crane will also be used for
unloading Mississippi and Paraná barges into a hopper nearby on the dock. The new E-Crane is scheduled to be installed and commissioned in the first half of the year.

E-Crane also provided several solutions for grain handling with barge-mounted E-Cranes in 2013 and 2014. The E-Crane’s balanced design makes it ideal for barge mounting. The E-Crane design is based on a parallelogram style boom which provides a direct mechanical connection between the counterweight and the load.

Because of this, the E- Crane remains in a near perfectly balanced state throughout its entire working range. The E- Crane allows gravity to
work for you, instead of against you, reducing horsepower requirements and power consumption by up to 50% and reducing maintenance and operating costs significantly. However, along with the significant energy savings that a balanced design provides, it also makes the E-Crane ideal for mounting on a floating barge. Because the E-Crane is balanced, the movement of the E-Crane causes very minimal listing and movement of the barge. A barge-mounted E-Crane is also beneficial because it floats up and down along with the material barges when the water elevation changes. This means that the cycle of picking material out
of the barge is never affected by water fluctuation.

Once again, a company in Argentina realized the great benefits of the E-Crane for grain handling as well as barge mounting. In early 2014, an order was placed for two E-Cranes to be mounted together on a single barge. The first crane is a 700 Series/Model 4264 PD-E with 26.4m (86.5ft) outreach and a duty cycle capacity of 5.5 metric tonnes (6.0 US tons). The second E-Crane, a 700 Series/Model 4290 PD-E has the same duty cycle capacity, but a longer outreach of 29.0m (95ft). Both E-Cranes work together to unload grain from a Paraná-sized barge into two separate hoppers also located on the barge. The hopper outputs the material onto a conveyor/shiploader system which transfers the material into a Handymax sized vessel on the other side of the crane barge. 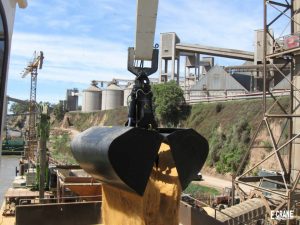 An E-Crane is also to be used for a similar operation in Brazil. In 2013, an order for a large 3000 Series/Model 30382 PD-E E-Crane was placed. The E-Crane will be barge-mounted and will be used to unload material barges. The material will then be directly transferred by the E-Crane to a Panamax-sized ship on the other side of the crane barge. The midstream transfer will occur along the Amazon river and will be the largest midstream transfer operation ever accomplished for E-Crane. The E-Crane will be equipped with a 30 cubic meter hydraulic clamshell grab which will be able to transfer 24 metric tons of grain in a single cycle.

Specifically designed for barge-unloading processes, the E-Crane is able to handle anything from coal to limestone to fertilizer to grain to scrap steel. The
E-Crane is a truly versatile machine in that it can easily switch between commodities and still offer the high production required at many ports and industrial facilities. Built for 24/7 duty cycle operation, E-Cranes have unprecedented life cycles, high efficiency, and low maintenance costs.
The standard E-Crane product line consists of five series of balanced hydraulic cranes (Equilibrium Cranes):700 Series, 1000 Series, 1500 Series, 2000 Series, and 3000 Series. E-Cranes provide longer outreach and higher duty cycle capacities than typical material handlers. Outreach ranges from 24.8 to 47.8 metres (82 to 157 feet) and duty cycle capacity ranges from 5.5 to 39 metric tonnes (6 to 42.9 US tons).