Swedish port company Mälarhamnar AB, with two locations approximately 100 km west of Stockholm (Västerås and Köping), has recently taken delivery of an E-Crane™ model 11264. This crane, mounted on an existing rail portal, will be primarily used for unloading coal from coasters (5000 DWT) for the local power plant in Västerås. In addition, the machine will be used for handling firewood and peat.

According to Mälarhamnar AB, the E-Crane™ will be an important factor in the company’s future bulk material handling capabilities. The port has previously concluded that its future would lie in the hydraulic machines, rather than the rope cranes already in operation in the port. This type of equipment will provide better handling rates, more flexibility and lower operational costs.

It was always important to compile a proper case study of the crane in combination with the vessels, hoppers, stockpiles, etc. to reach an optimal solution for the user. Therefore an extensive 3-D CAD study was completed to show the new crane on the quay with a range of different vessels. This ensured that all corners of the vessels could be reached in both full and empty conditions. Additionally, the size of the grab relative to the hopper and trucks was examined. At a later stage a hopper travelling on the same rails as the E-Crane™ is planned to be connected to the crane by means of steel beams to even further optimize the crane performance/hourly capacity. The design of this arrangement will be jointly made by Mälarhamnar and E-Crane™ International. 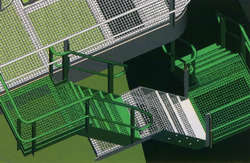 Another important aspect of the crane’s layout is the access from the lower onto the E-Crane™ upper structure. Access was complicated since the old upper could be reached through the crane column, whereas the access to the E-Crane™ had to be made on the outside as there is simply no room to reach the operator’s cab via the column.

Several 3-D simulations were made and discussed with Mälarhamnar and DNV for the practical layout and from a safety point of view.