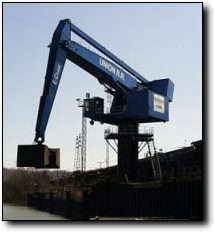 Shiny blue and towering more than 100 feet above the banks of the Monongahela, just upriver from Pittsburgh’s famous Kennywood amusement park, the new “E-Crane” at Duquesne Wharf is a sight to behold. Beyond its stunning height, massive size and sleek appearance, the real beauty of this new crane is in the way it will improve Union Railroad’s ability to competitively handle coal and other bulk materials well in the 21st Century.

Originally constructed in 1869, Union Railroad’s Duquesne Wharf was designed to transfer bituminous coal carried by barges on the ongehala River into rail cars. The coal, which was mined in Pennsylvania, West Virginia, Ohio and Kentucky, was hauled via rail to Pittsburgh and Conneaut Dock Company in Conneaut, Ohio. There, the coal was loaded onto vessels and sent via the Great Lakes to numerous power plants and industrial users in Canada and the northern United States.

Today, the shipment of coal from the same region to end users on the Great Lakes continues to take place through these docks and northbound URR and BLE trains.