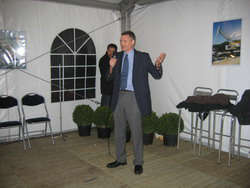 Mr. Jim Gutsch is a Senior Vice President of Engineering at Seaboard Corporation in Kansas City, Kansas. The E-Crane team worked closely with Mr. Gutsch and his project Engineer Rick Mohr during the development of the Seaboard’s Midema Midstream Transfer Facility on the Congo River in Matadi, Democratic Republic of Congo. 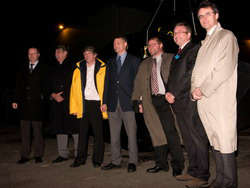 During the inauguration celebration in Zeebrugge on February 22, 2008, Mr. Gutsch was asked to say a few words about the project. “In all my years in engineering and purchasing equipment for jobs around the world, I have never encountered a supplier that was so determined and dedicated to find a practical solution. The Medima project was complex and difficult. The first suggestions offered by E-Crane were possible, but not practical due to lack of local infrastructure. The E-Crane team continued to work on improving the concept until a commercially viable and practical solution was found and agreed on”. 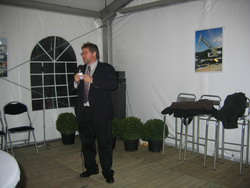 Both Greg and I are overwhelmed and impressed with the pride and determination that the E-Crane team has shown. Also, this reception and inauguration are without comparison.”

Seaboard operates grain processing and milling facilities throughout South America, the Caribbean and Africa. With the purchase and commissioning of the Mama Mobokoli, Seaboard is one step closer to being a vertically integrated, multinational grain products provider.