A massive crane which will allow Nova Scotia Power’s new coal-handling terminal to accomodate much larger vessels arrived at the Point Tupper Marine Terminal, Sunday. The E-Crane®, valued at about $5 million, was designed and fabricated in Belgium by Indusign and was loaded on the transportation vessel Jumbo Fairpartner at the port of Flushing, the Netherlands. It will allow for the offloading of bulker-type vessels rather than just the belted self unloaders the terminal currently handles. The E-Crane® can handle up to 800 tonnes of product per hour. The coal terminal went into commercial operation April 1. 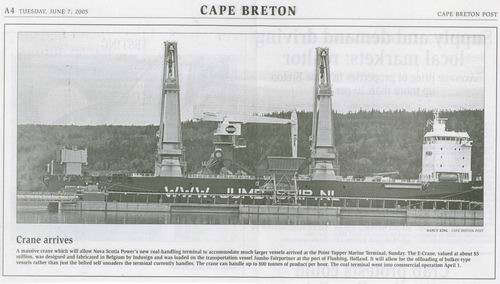