An E-Crane™ balance crane, manufactured in Adegem, Belgium by NV Indusign, is the workhorse of a new barge unloading facility that recently went into operation at Progress Energy Carolinas’ Sutton Plant, near Wilmington (NC), USA, on the Cape Fear River. E-Crane™ International-USA, based in Bucyrus, Ohio, handled the sale of the crane and installed it together with North American Equipment, the E-Crane™™ dealer in Nicholasville (KY).

The increasing cost of US coal and escalating rail freight rates had led Progress to find a more economical coal source. AD&MC (Atlantic Diving and Marine Contractors) developed and built a ship receiving facility to transload coal from ships to barges then transport it upriver to the plant, where it is unloaded from the barges and transferred from the shoreline by conveyor. Atlantic has a three-year contract to provide coal to Progress’ Sutton Plant, which provides electric power and services to 1.3 million customers in the Carolinas.

The E-Crane™ transfers the coal from the barges to an 855ft conveyor system that carries it up to the plant. Because the barges are 52ft wide, 14ft deep, and 250ft long, offloading with a traditional hydraulic excavator would have been inefficient. The E-Crane™ selected for the job is a 1000 series, model 7248, equipped with an 8 yd3 hydraulic clamshell grab that can reach out horizontally to a distance of 81ft.

E-Crane™ claims that the unit uses half the energy of conventional cabled or excavator-type cranes yet can move twice the payload as the payload and the weight of the boom are always counterbalanced. 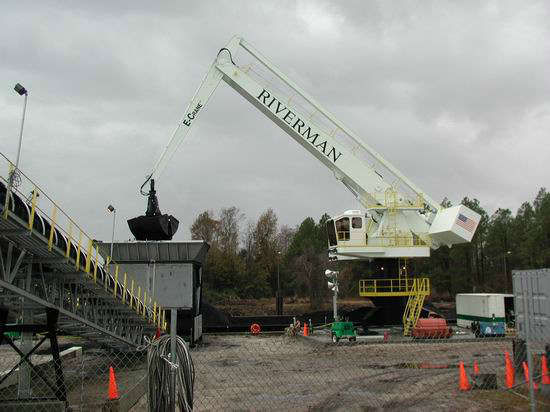 AD&MC opted for an E-Crane™ for discharge operations at the new barge handling facility at Progress Energy’s Sutton Plant near Wilmington, USA

As the arm extends out, the counterweight extends back and, as the arm moves in, the counterweight moves in also. Unlike a conventional crane that requires 80 percent of its energy just to move, the E-Crane™ has to do substantially less work, so it needs a much smaller and less expensive motor to move its hydraulics. Therefore, says the company, it handles about twice the coal with less than half the horsepower, resulting in lower operating and maintenance costs.