Another team in town is playing the “other” game of football. Quite well too.

The Bucyrus Soccer Club has kicked off its season with three shutout wins and has outscored opponents 19-0. “This season and the last two or three seasons, they know what the game is all about,” coach Kevin Fourman said. The club was 9-5-1 in 2002.

Fourman has been the team’s only head coach in its first nine years of existence.”We started in 1995. That first year we started off we basically only had Bucyrus kids,” Fourman said. “We figured we might as well open it up to high school kids from the other schools as well.”This year Fourman, a Spanish teacher at Bucyrus, has 15 players on his co-ed roster from Bucyrus, Wynford, Colonel Crawford and Galion. Because players come from so many schools, the team has no mascot or nickname. “We’ve got kids actually taking their soccer skills a step further,” Fourman said referring to past players who went on to play in college. “I like how it’s always full go. You have to be 100 percent all the time,” said Micah Whitt, a Bucyrus senior who primarily plays goalie. He is also team captain. “I like the pressure and I like the leadership position.” Fourman said the team has made a lot of progress in nine years. “I would say records don’t always show everything but we may have won two or three games the first three years we started off,” Fourman said describing his first rosters as having little experience. “We had a lot of athletic kids playing, but they knew little about soccer.” 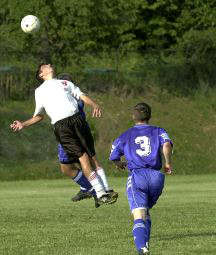 Beth Thompson
Brian Osborne goes up for a header to advance the ball against
Heritage Christian players Josh Hoag and Jared Williams,
No. 3, in a recent game for the Bucyrus Soccer Club.

That Fourman would take an interest in coaching a soccer club team is no surprise. His own playing career followed a similar path. Living on the east coast as a youngster he learned the game and fell in love with it. But when his family moved to Wayne County and the Northwestern school district, there was no soccer team to play on.

He made do by playing in recreational leagues and then went on to play in college at Ashland University. In nine years with the Bucyrus program, he now has a team with players capable of playing multiple positions.

“One of our strengths is we have a lot of understanding and experience as far as game strategy. Some of these guys that are seniors have been playing together since grade school,” Fourman said. “We’ve got a lot of all-position players and it’s working well. We’ve got a lot of guys running in and out. I couldn’t have done that with the personnel we had last season.”

Colonel Crawford senior Brian Osborne is one of those who has been with the soccer club for several years. In the first game of the season he had three goals and three assists. “That’s one of the best games I’ve had with the club,” Osborne said. “I think it’s my first hat trick (three-goal game) and three assists is awesome.” He described what it is like to get the ball on a breakaway with a chance to go one-on-one with an opposing goalie. “It’s an adrenaline rush, an exciting feeling,” Osborne said. “When you get your chance, you don’t want to miss.”

The Bucyrus Soccer Club plays home games at Lane Street Field which the city has allowed to become a soccer complex. The schedule includes independent teams from private schools, other soccer clubs, some JV teams and varsity squads.

But because the team is not affiliated with the Ohio High School Athletic Association, there is no post season for the Bucyrus Soccer Club. “I think it is extremely frustrating not playing in tournaments,” Whitt said. “We play pretty much for pride.”By Gary Ogle