E-Crane has successfully completed the conversion of an American Model 1200 crane from the original mechanical driven diesel engine crane into a completely electric/hydraulic driven machine. 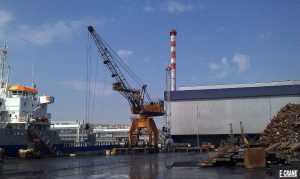 For dozens of years, scrap and finished products at Çolakoğlu Metalurji in Gebze (Turkey) have been handled by 3 American 1200 cranes. These AM-1200’s are diesel driven, mechanically powered draglines. The cranes did not have “power load lowering” or other important security features found on modern cranes. Moreover, because of the “free fall hoist mechanism”, there was little control over the grab and damage to the engine and/or the ship being loaded/unloaded could easily occur. The diesel engines did not comply with current emission standards and worst of all they consume an enormous amount of costly diesel fuel.

Çolakoğlu asked E-Crane to brainstorm with them about the possibility of converting the AM 1200 cranes from diesel engine driven to modern electric drives. The objectives of this exercise were:

After extensive consultation with the engineers at Çolakoğlu, E-Crane suggested the following plan for conversion of the AM 1200:

The Detroit diesel engine was replaced by a 510 kW/1500 rpm Wölfer/Siemens electric motor. This motor combined with a SEW speed reducer and entirely refurbished drum shafts ensures that both hoisting and lowering can be done in a controlled manner without the use of the troublesome chain drive. Slewing or crane swing was previously a mechanical system. Today this function is accomplished with a 168 kW electric motor and a SEW bevel gear reduction. The boomhoist drive is now integrated into the electric drive and controlled by a PLC. In other words, Çolakoğlu is so pleased that they immediately placed an additional order for the conversion of the other 2 American 1200’s to be operational mid summer 2011.