At E-Crane we fully understand that the most important factor in the productivity of any machine is the skilled operator! Skilled operators combine qualities such as:

Every E-Crane installation is followed by on-site training of the operators and maintenance staff by our erection supervisors and this in close cooperation with the on-site management team. It was no different at River Metals. 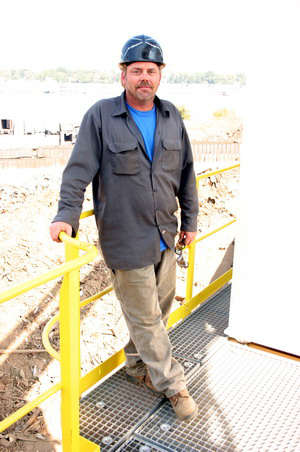 David became an operator 12 years ago when he went to work for River Metals. In those days the yard used rail cranes to handle the scrap. Around 1998 he started working with new excavators/material handlers. From an operators point of view this meant going from cable to hydraulic. The biggest advantage for the operator was that these new material handlers offered much more comfort for the operator and quick and precise grab positioning ! David clearly remembers that only two joysticks replaced the 5 big levers and couple of foot pedals for the brakes on the rail cranes… It goes without saying that operating such a rail crane required a very serious physical effort and often resulted in low back pain problems.

On 22nd of September at nine o’clock in the morning David worked for the first time with the new 1000-series E-Crane. Asking for his first impressions, he admitted that he was very intimidated at first… but this was going to change quickly ! It took David less then one hour (!!!) to become proficient…

Indeed David demonstrated an excellent competence driving his E-Cane. The crane has no less then 105 ft of reach, weighs in at over 300.000 Lbs and lifts more then 10 Tons !

According to David, the biggest differences between a big excavator and the E-Crane are the reach (105 ft) and the impressive view because the cab is 60 ft up in the air. The joystick functionality is identical and this shortens the learning curve considerably. The proportional torque controlled swing was the biggest challenge. Another big plus, according to David, is the fact that the crane can travel fast along the rails and the travel can be combined with all other crane movements. Also the unequaled stability of the crane is impressive.

For E-Crane engineers it is always very rewarding to work together with excellent, dedicated and motivated crane drivers. At River Metals this was no different. Congratulations to all at River Metals!

Metals Recycling, LLC (RMR) is a wholly owned venture of Cincinnati-based The David J. Joseph Company, one of the USA’s largest scrap metal companies. It is headquartered in Fort Mitchell, Kentucky, and was formed in August 1998 to better serve its regional customers. The formation of a separate, stand-alone company enables RMR to foster the spirit of entrepreneurship that is vital to success in the scrap collection, processing and services industry. River Metals Recycling is the largest scrap processor in Kentucky and in the greater Cincinnati area. RMR’s equipment includes automobile shredders, an aluminum shredder, balers, shears, mobile shearing, torch processing, auto crushers, and an extensive truck and railcar fleet. RMR processes over 1,000,000 tons of ferrous scrap and 100,000,000 pounds of nonferrous scrap per year.