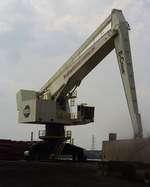 VENICE – A new intermodal terminal is expected to begin operations by the end of March.

Madison based Beelman River Terminals Inc. is building the facility which will accomodate rail, barge and truck traffic. Including drivers, the new facility will have about 45 employees. Company President Sam Beelman said construction is progressing, and he expects part of the facility to be in use soon. “Hopefully we’ll be unloading barges in 45 days.” Beelman said “We will be loading and unloading barges, bulk commodities and steel products.”

The 30 to 35-acre site is located near the old Kerr Island area in industrially zoned land between the McKinley and Merchants bridges. “It’s a good location” Beelman said. “It’s the northern most ice-free lock-free facility on the Mississippi River in terms of general commodities. It’s close to industry and will cut time and costs for most shippers.” The facility will have two (2) loading/unloading docks. One will have a standard 150-ton crane and will be used primarily for unloading steel products.

The second dock will have a new equilibrium E-Crane™ capable of unloading between 1.100 and 1.400 tons per hour. Beelman said that crane was put together in Belgium, shipped by an ocean freighter, then trucked to Venice, where it is waiting installation. While Beelman declined to discuss the cost of the new facility, previous estimates by others were between 56 and 89 million.