The global recession hasn’t slowed the plan to double Rotterdam’s capacity to provide economies of scale to shippers.

ROTTERDAM, Netherlands — When plans were made a decade ago to double the capacity of the port here, container shipping was growing at 10% a year. Since then, a global recession has battered the shipping industry, and, while traffic is creeping back, shipping analysts don’t expect growth to top 6% a year for the next decade.

ROTTERDAM, Netherlands — When plans were made a decade ago to double the capacity of the port here, container shipping was growing at 10% a year. Since then, a global recession has battered the shipping industry, and, while traffic is creeping back, shipping analysts don’t expect growth to top 6% a year for the next decade. 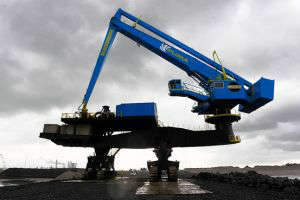 The Blockbuster crane, above, can lift a 40-ton block from 120 feet away. Twenty thousand such blocks will be used to create a port breakwater.

Yet Rotterdam’s $4.1 billion Maasvlakte 2 expansion is steaming ahead, with enormous cranes swinging whale-size blocks into place and dredging ships creating land where the North Sea once churned.

“There’s never been a Plan B,” says Sjaak Poppe, a spokesman for the port.

Risks aside—and there are several—Rotterdam officials are confident that the key to taking advantage of even a slow rebound in global trade is to get bigger. In a recession-shocked world where austerity is the norm, shipping companies are seeking economies of scale more than ever. That, port officials reason, requires huge deep-water ports like Rotterdam’s.

Rotterdam is already the biggest container port in Europe, processing the equivalent of 9.7 million 20-foot containers last year, putting it ahead of Antwerp, Belgium, which processed 7.3 million, and Hamburg, at seven million. Maasvlakte 2, which port officials here say is the world’s largest land-reclamation project, is crucial to maintaining business from companies like Neste Oil Oyj and shipping company DP World Ltd.

The 2.5 miles of extra docks at Maasvlakte, pronounced MAHS-vlac-tuh and named for a nearby river, will allow ships to land 8.5 million more 20-foot containers a year. The expansion is part of a plan to “double or triple” container traffic within 20 years, Mr. Poppe says.

Construction began two years ago, and the first docks should be ready in 2013, although the project won’t be finished until 20 years later. When the expansion is complete, the port will be the size of 2,800 soccer fields.

What’s Involved in Getting Bigger

The project does carry risks. With global trade slumping 12% last year, shipping companies lost an estimated $20 billion. And while global container volume has returned to the level of 2008, much of it is within Asia or between Asia and Latin America. Of the world’s 20 busiest container ports, 13 are Asian.

Rotterdam also faces competition from Antwerp and Hamburg, with which it competes to service the German industrial heartland and the consumer belt of northwestern Europe.

Rotterdam “will grow if the global economy grows, not because it will take away market share,” says Eddy Bruyninckx, the Port of Antwerp’s chief executive. Inland ports like his “are less windy, more productive and closer to other communication links,” he adds.

Rotterdam’s location on the sea makes it vulnerable to storms. But it also gives it deep water, “which means you can go straight out to the ocean,” says Kim Fejfer, CEO of APM Terminals, a unit of Denmark’s A.P. Moller-Maersk AS. “And the shipping lines are putting in bigger and bigger vessels.” APM has already leased space on the coming Rotterdam docks.

The trend toward bigger vessels is key to Maasvlakte 2. Shipping analysts figure the number of ships on the seas that can carry 15,000 20-foot steel containers—double the capacity of most container ships—will quintuple by 2013. Such supersizing helps lower the cost for shipping companies of every item moved.

Maersk is part of a group of companies, led by Dubai’s DP World, that are spending $8.3 billion to build warehouses, docks and refineries, in addition to the $4.1 billion the port is spending to build the land. The ability to dock superlarge ships was what drew the companies to Rotterdam, says a spokeswoman for France’s CMA-CGM SA, the world’s No. 2 container line by volume, behind Maersk.

Maasvlakte 2 has also attracted the attention of Finland’s Neste Oil, which is building a plant on the new docks that will turn palm oil, animal fats and other raw materials carried by ship into biodiesel fuel that can be sold in Europe. Rotterdam has become “one of the world’s important points in the oil business,” says Neste spokeswoman Hanna Maula.

At the heart of Maasvlakte 2 is dredging the sea to create land, a specialty of the Dutch since the Renaissance.

The construction zone is like a Jurassic Park of strange-looking cranes, ships and pipes pumping sand and rock into what was once water. Engineers say Global Positioning Systems routinely mistake new land at the site for the North Sea. A crane specially designed for the project, the Blockbuster, is among the world’s most powerful. From 120 feet away, it can lift a 40-ton block, 20,000 of which will be used to create a breakwater to protect the port from winter storms.

Two of the global dredging industry’s top five companies are Dutch. And a Netherlands company, IHC BV, is the rare European shipyard still in business, making dredging vessels that cost upward of $300 million and can carry 40,000 tons of rock.

Maasvlakte 2, blessed two years ago by a rubber-booted Queen Beatrix, has already become a national icon amid a sluggish economy. A new visitor’s center at the site—displaying ice-age mammoth tusks and unused bombs dumped in the sea by World War II British planes returning from Germany—had been expected to draw 60,000 tourists this year. It has already drawn 125,000.

The “E” in E-Crane® (Equilibrium or balance crane) stands for Equilibrium. The E-Crane design is based on an ingenious parallelogram style boom that provides a direct mechanical connection between the counterweight and the load. This unique system ensures that the E-Crane® remains in near perfect balance throughout its working range. Compared to conventional cranes that require as much as 80% of their available energy just to move the boom, stick, and grab, the E-Crane® makes gravity work for you instead of against you, reducing horsepower requirements and power consumption by up to 50% and significantly reducing maintenance and operating costs.

The E-Crane series offers models with up to 50 tons duty cycle capacity due to their movable counterweight and fixed parallelogram linkage as well as up to 15Oft/50m of horizontal and up to 100ft/30m reach below grade. Its modular design allows each E-Crane® to be tailor made to the client’s specific requirements.