E-Crane Worldwide, a heavy equipment design and construction company based in Belgium, with subsidiary companies in The Netherlands and in the USA, has been providing reliable solutions to the recycling and bulk handling industries for the past 25 years. The company’s equipment is used in a variety of settings, and its equilibrium cranes are widely used — uses include offloading cargo from barges.

Over 25 years ago, E-Crane developed its first balance crane. It is no wonder that today E-Crane has gained widespread support around the world as a reference in balance cranes, because its equilibrium balanced cranes were the very first of their kind. After 25 years of manufacturing, upgrading and modernizing, the E-Crane has evolved into what it is today. Balance is one of the key factors for any crane in the industry. Over the years, E-Crane has perfected its fail-safe system which guarantees that the crane will always remain in a near perfectly balanced state throughout its entire operating range. The design of the E-Crane is based on an ingenious parallelogram style boom that provides a direct mechanical connection between the counterweight and the load. Pivoting on its axis, the counterweight moves using hydraulic cylinders.

This means that as the load is moved outward, the counterweight compensates by rotating backward. This design is what keeps the E-Crane balanced during its work cycle. Such balanced design has many benefits, including increased efficiency and lower operating costs. Also, thanks to a pivoting counterweight, the loads imposed on the wharf or surface do not result in any uplift, making the E-Crane a suitable solution for mounting on any type of surface or barge.

Competitive on the Market

E-Cranes are rapidly replacing conventional dock cranes as they are a more efficient solution and less costly to run and maintain. Instead of a host of levers to control the equipment, there are two joy sticks in the E-Crane operator’s cab. Together with exceptional cab visibility they allow accurate positioning of the grab using positive hydraulic control.

In terms of competition, the E-Crane is placed firmly between production line excavators (or material handlers) and large scale dedicated unloading structures. Even the smaller E-Cranes offer much more unloading capacity than the standard excavator. The larger E-Cranes can compete with dedicated systems in terms of production and come in at only a fraction of the installed cost with even less annual maintenance costs. The E-Crane product line is rated for barge offloading from 500tph (tonnes per hour) to 2,000tph.

E-Cranes can be mounted on a fixed pedestal lower, which takes up the smallest footprint, or a free standing pedestal which requires the least amount of local support. Travelling options include electrically driven rail undercarriages as well as diesel crawlers with electric plug in. The balanced design also provides great stability making it the perfect floating barge mount application. This versatility makes the E-Crane suitable for a huge range of bulk handling solutions. The E-Crane company also now offers its customers complete barge offloading solutions including hoppers, feeders, barge positioning systems, and even floating solutions mounted on deck barges. E-Crane has great expertise in barge offloading, and uses this to design the most efficient systems so that its customers can get as much out of their machines as possible.

One of E-Crane’s major successes in floating barge cranes can be found at the PowerSouth Lowman Power Plant on the Tombigbee River near Leroy, Alabama, USA. The centrepiece is a 2000 Series/Model 18264 PD-E E-Crane rated for 1,500tph for offloading coal or limestone. Previously, Lowman used an old gantry rope crane to unload coal from barges. Since the company now uses a new FGD process which requires the handling of coal and limestone, it needed a faster, more efficient and more versatile barge unloading solution with a higher capacity. Together with E-Crane engineers, a complete and easy solution was determined: an E-Crane floating terminal consisting of a 2000 Series E-Crane, two barges (one for the E-Crane and one to support the conveyor), a hopper, a barge-haul system, and a barge-breasting system. The 2000 Series E-Crane has 26,4 m (86.5 ft) of outreach and a lift capacity of 27 metric tonnes (30 US tons) and is equipped with a 25-yard bucket which can unload 1,500 tonnes per hour. 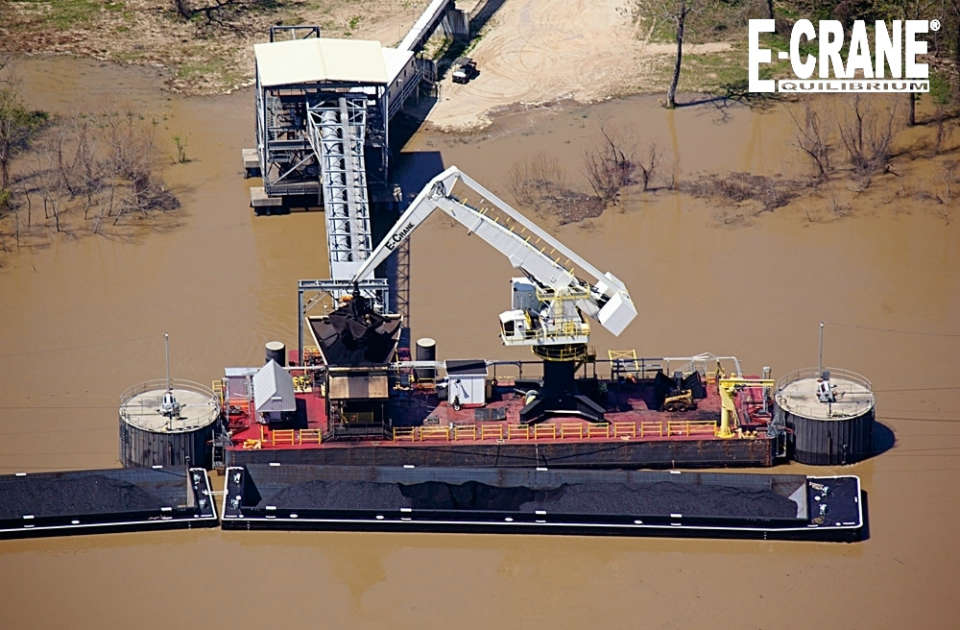 E-Crane’s hydraulically pivoting, mechanically linked boom design keeps the machine in near perfect balance throughout the working range. Having gravity work for you instead of against you reduces horsepower requirements and power consumption up to 50%. Five series of E-Cranes are available with outreaches up to 50m (165ft) and duty cycle capacities up to 39 metric tonnes (42.9 US tons). A central lubrication system and accessible hydraulics simplify maintenance. E-Cranes’ positive grab control allows for precision grab positioning, while the pushdown force ensures full grabs for every cycle. The modular machine design concept allows E-Crane engineers to tailor custom solutions for customers’ needs.

The barge-haul system provides ‘utility grade’ unloading equipment and can move one or two loaded 35ft by 195ft jumbo barges with a capacity of 1,500 tonnes. The vector-opposed barge-haul system consists of two opposed winches — one forward, one trailing (upstream/downstream) — that work in tandem with a continuous 7/8-inch-diameter steel cable. The control system uses dual vector drives, commanded by a PLC, to electrically co-ordinate both winches for maximum barge control. Winch motor speed is monitored continuously by the PLC to eliminate freewheeling or loss of payout control. The barge can be secured against drifting away from the river cell or dock face by a continuous barge-breasting cable. The system can be operated from inside the E-Crane cab or from a remote location.