Finally, on Friday 26th January, the annual new year’s reception, organized by the direction of Indusign/ E-Crane Worldwide for their employees, could take off. As every year, the extra invitees were Mr. d’Ancona, Mrs. Hendrickx and Mr. Tolhuizen from ECI-Europe, and Mr. De Meyere from the production plant in Poland. Instead of making one long speech, executive director Lieven Bauwens divided his messages over several shorter intermezzo’s. Three oasts were made during the pre-diner drink, accompanied by lovely hors d’oeuvres by caterer Koen.. A first toast was made to a happy and healthy 2007 for all of us, for our families and for our friends. A second toast was addressed to our clients.

Because no matter how good our product, without loyal clients no company can keep growing. Therefore, E-Crane Worldwide would like to thank all its costumers for their continuous trust. Thirdly, there was one additional toast thanking all employees for their commitment: thank you for a great 2006, together we will make 2007 at least as successful as last year! 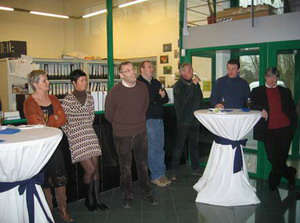 Jan Depoorter, responsible for the safety at Indusign/ E-Crane Worldwide, also gave his annual speech concerning safety in our company. The focus was on 3 compliments and 3 requests. In 2006 there were no accidents worth mentioning, and the excellent results for the training “Manlift” as well as the efforts made towards the safety of the overhead crane deserve to be complimented. There is always room for improvement though, even in our company, hence also 3 requests for 2007.

Extra attention is asked for the permanent accessibility of all fire-fighting appliances. Each of us is asked to take up his/her responsibility for a tidy and thus pleasant work-environment. Finally, we would like to remind our new and often young employees to always “think before you act”, i.e. always act calmly and thoughtful, to ensure 2007 becoming another safe year for Indusign / E-Crane Worldwide. 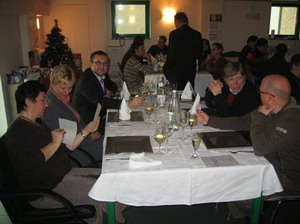 The actual menu consisted of a plate of mixed starters, an elaborate warm buffet and a delicious range of desserts. There was an extra welcome to 7 new employees: Andy, Pavel, Ann, Tim, Remco en Gauthier joined us in 2006, and in January 2007 Dominique became the 30th member of our team.

Everybody got some present to take home: a bottle of wine, a calendar, a diary, … The nicest gift was of course the New Year’s present from the direction to the employees of Indusign / E-Crane Worldwide: free internet for a year! 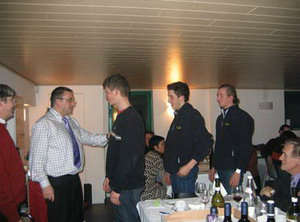 We already mentioned it earlier: our company has a staff of exactly 30 man / women today. Indusign/ E-Crane Worldwide is proud to be an “equal opportunity company”: men and women are considered equals here and are treated as such. That is to say: almost as equals, since the 3 women got a beautiful bouquet of pink roses as an extra treat. Thanks, fellows… During the weeks leading up to the reception people said: “every year, the speeches get shorter and the reception takes longer”. About the first thing one can still debate, the second one has been proven beyond any doubt.

In short: this is a nice occasion to learn to know each other and get another perspective on one another. We are already looking forward to next year!