The ‘Mama Mobokoli’ was inaugurated in the port of Zeebrugge on 22nd February 2008. This floating trans-loading station, designed and built by E-Crane Worldwide, was moored in Zeebrugge, ready to be towed to its final destination in Matadi, Democratic Republic of Congo. 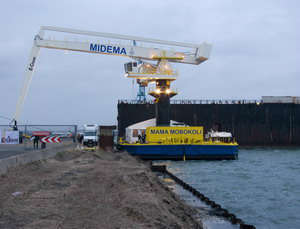 Mama Mobokoli is a 1000 m² barge, equipped with a 1500B Series E-Crane with reach of 39,5 metres and lift capacity of 13.5 tonnes. ‘Mama Mobokoli’ is Lingala (one of Congo’s official languages) for ‘the mother that takes care of you’, the nourishing / feeding mother. The barge is now being towed from Zeebrugge to its final destination in Matadi, Democratic Republic of Congo.

This journey across the Atlantic Ocean will take about 40 days. There it will be used to unload ships up to handy-max size (capacity 25 to 30,000 tonnes), to feed the Midema (Minoterie de Matadi) flour mill.

Midema is owned by Seaboard Corporation, an American company. Matadi is the farthest inland harbour on the Congo River. As in many African ports, the users of this Congolese port are confronted with major congestion problems.

The existing infrastructure is dated and neglected, only one of the 10 original quays is still working and the waiting time for a berth can be several weeks. This expensive problem forced Scaboard to look for a suitable solution. After carefully reviewing all options, such as investing in the existing infrastructure or building a new quay, a floating transloading station proved to be the quickest, most flexible and cost-effective solution.

To unload the ships arriving at. Midellla, the barge will be towed alongside the vessel that is to be discharged. Once secured, it uses its winches to move along the ship. This enables the E-Crane® to unload all cargo holds quickly and efficiently. This new floating terminal will greatly improve the capacity, efficiency and flexibility of Midema’s ship unloading operations

Indusign NV / E-Crane Worldwide started in 1990 as a design engineering and consulting office for the heavy equipment machinery and constructing business, soon to be followed by the installation of an assembly plant in Adegem (Maldegem, Belgium). Since then two subsidiary companies have been added, dedicated to providing technical support and sales management for all E-Crane® related activities in Europe (E-Crane International Europe) and America (E-Crane International USA).

E-Crane® now has a proven track-record with satisfied customers all over the world, mainly in Europe and Northern America, but also in South America and Asia. This project in the Congo puts E-Crane® on the I African map, and E-Crane was recently awarded a mega-contract for the CITIC (China) mining project in Australia. Three floating trans loading stations, each equipped with 2 3000-Series E-Cranes will be transloading iron ore at Pilbara in northwestern Australia. CITIC Pacific Mining expects to export 27.6m tonnes per year.

The “E” in E-Crane® stands for Equilibrium. The E-Crane® design is based on an ingenious parallelogram style boom that provides a direct mechanical connection between the counterweight and the load. This unique system ensures near perfect balance throughout its full working range. Compared to conventional cranes that require as much as 80% of their available energy just to move the boom, stick, and grab, the E-Crane® principle results in significantly lower maintenance and operating costs. The E-Crane® product line is divided into different Series, depending on their lift capacity and outreach. The E-Cranes capacity ranges from 7 to 45 tonnes, with reach from 20 to 50 metres. Each E-Crane® is built to customer specifications. Besides designing, building and erecting the cranes, E-Crane® service engineers provide training for the crane operators and maintenance staff, and E-Crane® clients can benefit from a worldwide service network for spare-parts and maintenance. So far, E-Crane® has delivered over 15 barge or ship mounted E-Cranes worldwide. These floating bulk handling terminals are well suited for both ship-to-shore operations as well as midstream transfer.