Innovation and Sustainability at Living Breakwaters 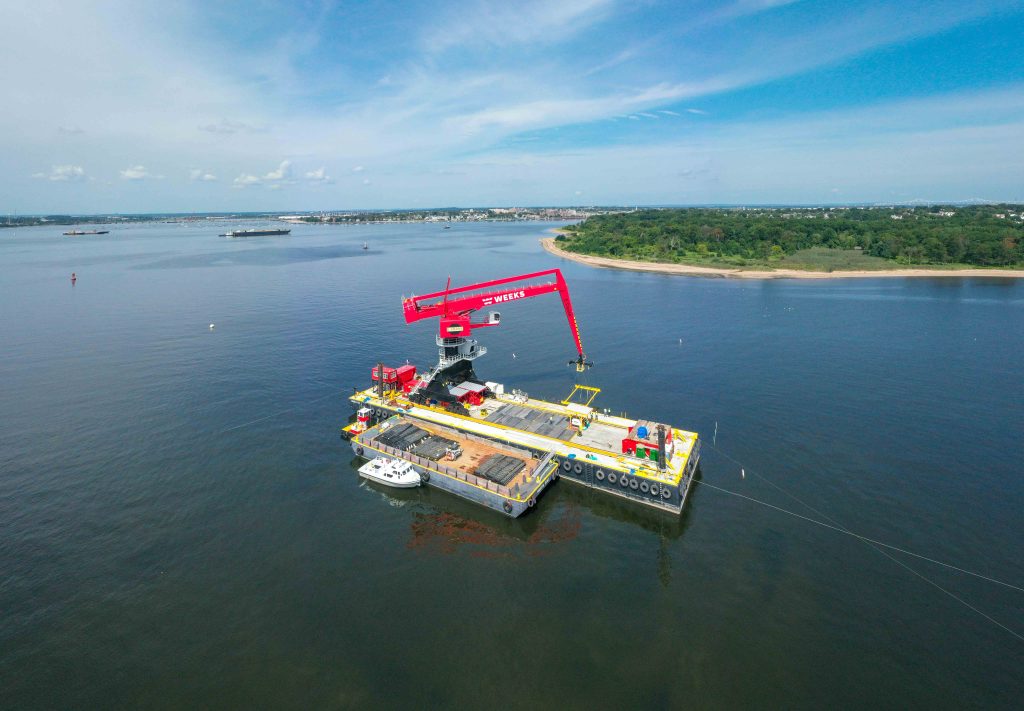 Sea defense system protects shoreline and promotes marine ecosystems. The Weeks Marine 537 rig, with it’s one of a kind 3000 Series gantry on barge E-Crane, towers over the shoreline just south of Staten Island, New York.  From the beachhead, onlookers see the massive machine place rocks below the water’s surface with surgical precision.  From the water, Nearby mariners and fishermen catch a view as the operator places architectural concrete elements atop the boulders with the flair of a roman sculptor. 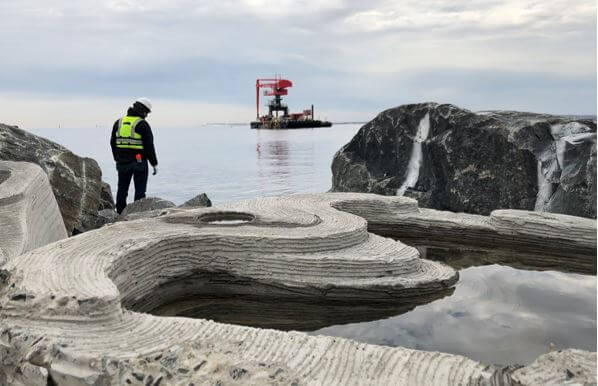 But this series of eight breakwaters is much more than a fancy stone wall.  “Living Breakwaters” is an innovative coastal green infrastructure project that aims to increase physical, ecological, and social resilience.

Hurricane Sandy devastated the Northeastern seaboard of the United States in October 2012, causing billions of damages with her high winds and massive storm surge.  In the aftermath of this historic event, planners and engineers began to research ways to protect the shoreline now, and in the future, as sea levels continue to rise due to climate change. 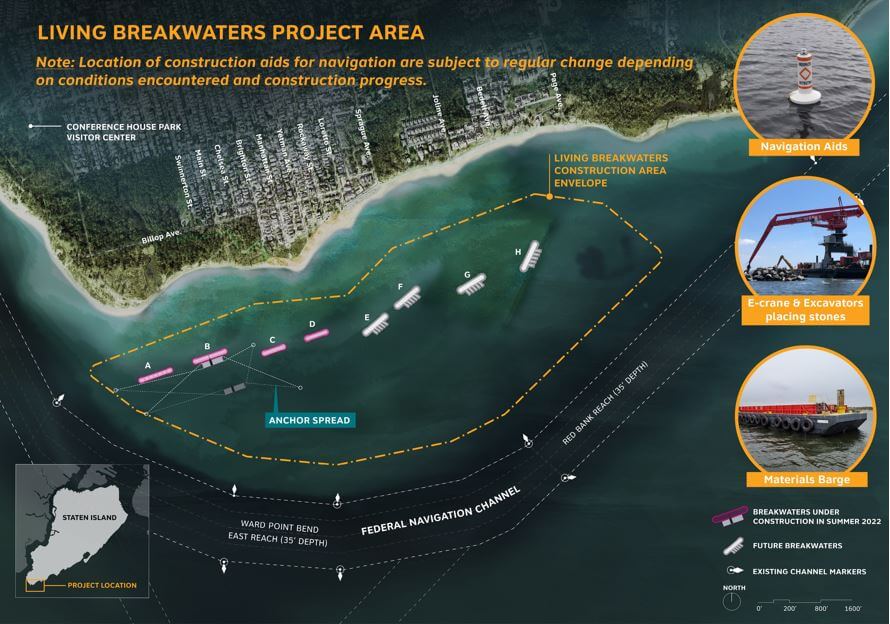 Biologists and ecologist worked closely with marine architects and landscape engineers to develop a “Living” set of breakwaters.  A unique set of eight layered breakwaters that would not only protect the shoreline but promote the revival of the local marine habit that had long been decayed from overfishing, erosion, and pollution from nearby urban areas.

Each breakwater is constructed with habitat enhancing features such as tidepools, armor units with nested oyster beds, and reef ridges.  Each element designed to promote marine life, from birds to seals to snails to fish.  Upon completion, selected armor stones will be seeded by the Billion Oyster Project, a local organization dedicated to returning the natural oyster occupation of New York Harbor. 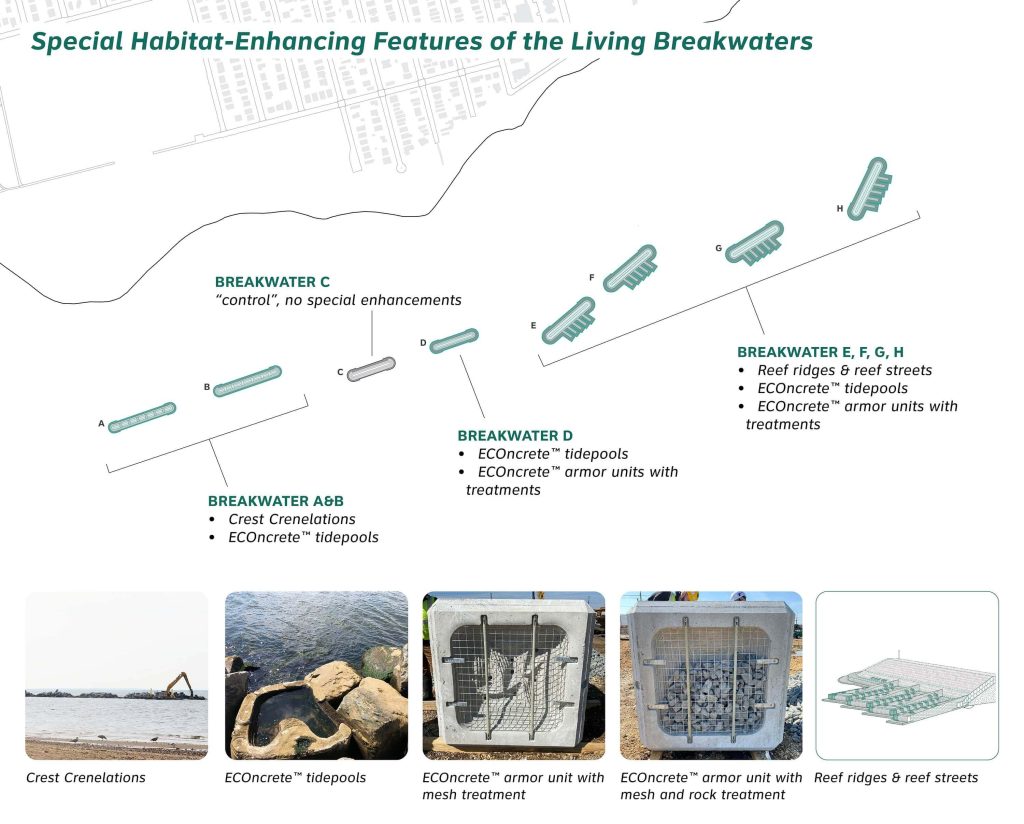 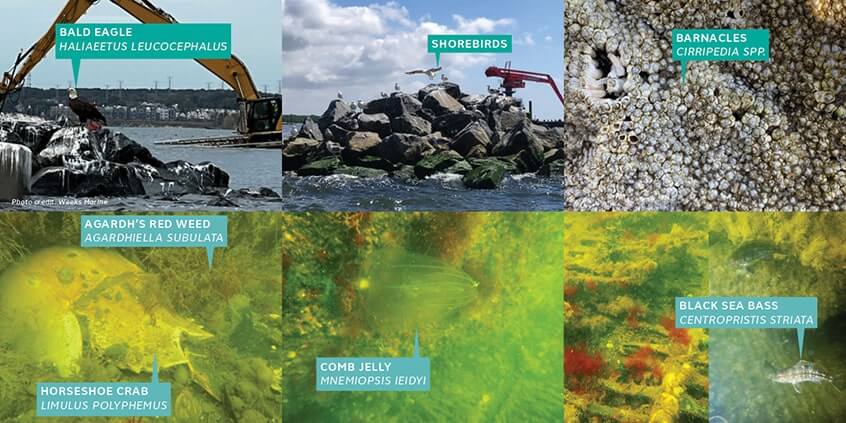 The project, estimated to complete in 2024, will culminate with a Visitors Center and public science curriculum for local students from 6th to 8th grade to showcase the Living Breakwaters as an investment in sustainability and eco-resiliency.