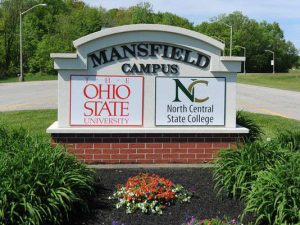 SHELBY – Recent North Central State College graduates working at an E-Crane facility in Texas spoke with representatives from the company and college on Monday to discuss their on-the-job experience.

The NCSC graduates and E-Crane service technicians, Joe Biglin, Neil Fortney and Jeremy Scribner, phoned in for a video conference via Skype at 11:30 a.m. Tuesday.

The three E-Crane service technicians said their job is to make sure the equilibrium cranes are working properly at all times. Scribner said they’re always finding ways to improve crane performance.

Steve Osborne, CEO of E-Crane USA, said the company works with Central Ohio resources, like NCSC, to find hard working people to employ at E-Crane locations. The company is based in Belgium with various locations throughout the world. The company’s Galion facility is one of its main American locations and currently has 18 employees. Osborne said E-Crane looks to hire hardworking people with mechanical and hydraulics experience. “We tap into Central Ohio resources like North Central State to hire hardworking people we believe can build a career with our company,” Osborne said. He said the company plans to work more closely with NCSC to find more young motivated people like Biglin, Fortney and Scribner.

The E-Crane Texas crew said their NCSC education helped prepare them for the real world, and transitioning into a job in a different state.

“(E-Crane) takes care of you,” Fortney said. “The work is good. You learn something new everyday.”

Biglin said, “(NCSC) definitely helped us out. Learning everyday at (NCSC) in classes makes me want to learn everyday (on the job).”

Scribner said current NCSC students applying for jobs shouldn’t limit themselves to one particular field. “Apply for as many jobs as you can,” Scribner said. “Don’t just look for work in your field, apply for work in any field. I applied for around 300 jobs before getting this one.” He said his NCSC education prepared him with skills to apply for other jobs outside of his field.

Osborne said the three graduates are successful because they’re able to tie learning in with the real world and solve problems at work.

The ability to problem solve means more in the real world than being perfectionists, according to Osborne.