Click on the image to see the original article.

Continuing to increase the productivity of the port:

Reforms on the Dock, Crane Barges and the New E-Crane.

Terminal 6 estimates that there will be an approximate increase of 100-110% in the volume of discharge barges in the coming years. This growth is partially due to the installation the new CAIASA plant located in Asuncion (Paraguay) as well as the increased production of grains and soybean meal from other plants in different ports along the Parana-Paraguay waterway. This increase would mean going from 900,000 tons per year to 1,900,000 tons per year.

Given this scenario, it was necessary to improve the efficiency of the barge unloading operations at T6. In order to begin, we launched the redesign of the operating circuit together with our partners and river owners that we operate with, ensuring the reduction of delays caused by the positioning of the barges and the preparation of documentation.

In preparation for this, we installed a new hydraulic crane (Sennebogen 870 M) with a productivity of 500 tons per hour in early 2012. In the middle of this year, we also began to discuss the possibility of changing the Bucyrus crane barge dock, utilizing more modern and more efficient technology. In early 2013, a tower crane was installed to remove barge covers prior to the barges entering into the discharge zone. This allowed for increased productivity and efficiency by reducing the time that was previously lost uncovering barges by the unloading cranes.

In order to achieve the new desired productivity, repairs and modifications were begun in the spring. This includes: 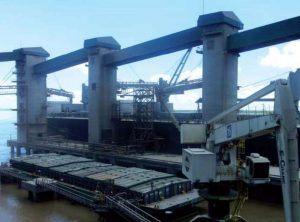 The Logistics Integration with CAIASA

CAIASA entrepreneurship emerged as a result of joint work between all involved in the logistics chain including the charging port, operator or carrier, and the port of discharge. This was done in order to better coordination operations and to minimize delays in the three steps involved (load – transit – unload). The result is beneficial for all parties.

A constant exchange of information with owner (Lineas Panchitas G) allowed for better decision making moving towards operational performance improvements at the port of loading (CAIASA). In 2014, T6 continued with meetings on both ends of this integrated chain, providing operational support and proposals for logistical improvements in the barge circuit, as it has done since its inception.

To mount the E-Crane, T6 had to modify in the dock infrastructure. This work was done in conjunction with the sector assets, to extend the dock platform to 6m long by 8m wide (48 m2) including placing three more piles into the river and laying network electrical power supply.

In January of 2013, work began on the barge dock. After analyzing the best mounting option, it was decided to build the E-Crane from above the canyon, which required an 800 ton Roman crane which took three days to assemble. In September, the Roman crane arrived at the terminal, and the E-Crane assembly began in October.

Success of the operation was due to excellent planning between all participating sectors: asset maintenance and port operations, as well as the companies that participated in the assembly (E-Crane and Roman). The Roman crane lifted suspended E-Crane parts weighing over 30 tons at a distance greater than 50m! The complete E-Crane assembly took only seven days to finish.

After assembly, E-Crane technicians finalized all hydraulic and electrical connections and completed the E-Crane testing, tuning, and commissioning.

Who is CAIASA?
CAIASA is a Paraguayan port terminal located in Puerto Villeta, with two springs, storage silos for flour grain and oil, oil tanks, and an oil processing plant. A joint investment of about two hundred million dollars turned CAIASA into an industrial facility with cutting-edge technology. The plant has a processing capacity of 4,000 tons / day, which will produce soybean meal high protein and crude soybean husk pellets. The facility employs more than 100 people, and during the construction period employed over 1,000 laborers.

In order to transport goods from this Paraguayan port to T6, the AGD Bunge and partners, invested in a river transport tug from a company called Tio Kike SA. Convoys of 15 barges, each carrying 2,000 tons of flour or oil, embark from CAIASA. Products are then shipped in trans-oceanic vessels for subsequent commercialization abroad. The goal that was set by T6 in 2012 was to achieve a rate of 1,000 tons / hour for a daily rate of 12-14,000 tons for grain or flour. To accomplish this, T6 had to find a crane that with a consistent productivity. The crane also had to have the ability to hoist a medium blade (front loader) to clean material inside the barge. The crane had to have a range (outreach) of at least 20 meters, to allow for optimal unloading of Parana jumbo barges, which have a greater capacity and tend to be the most popular sized barge transiting the Parana-Paraguay waterway.

Once all requirements were defined, a thorough analysis was done comparing productivity, capacity, range, and costs, etc. by the E-Crane team. T6 decided on a 1500 Series / Model 11264 PD-E.

“Leading the planning and installation of the E-Crane was a unique and enriching experience. Being part of the team, I work with one of the few cranes with these characteristics in Argentina. It was an excellent opportunity for teamwork, and showed commitment and responsibility of every team member to make this a reality. Without the dedication, effort, and energy of the team, we would not have met our goal, which in addition to the correct assembly of the crane, included finalizing the project a day earlier than scheduled, without deviations in the budget and with 0 incidents / accidents. This achievement is undoubtedly a merit and an asset to each sector: Purchasing, Port Maintenance, Port Planning, Supply, Harbor Safety, Port Operations, Port Control Contractors, and Suppliers. Thank you! ”
German Bertolo – Contracts Supervisor, Supply and Maintenance of Civil Complex.

Assembling the pedestal on the dock.