Two E-Crane™ equilibrium cranes are the workhorses of a barge unloading facility for Global Material Services (GMS) located in Venezuela, South America, on the Orinoco River. GMS recently erected its second E-Crane™ which was commissioned last May. The cranes are barge-mounted on a single platform where each crane has its own hopper and take-away conveyor. These conveyors travel over two miles to feed bauxite to Bauxillum which uses it to produce alumina.

The equilibrium crane, generally referred to as the E-Crane™, is a revolutionary and multifunctional crane for heavy-duty material handling applications. Designed for bulk material handling, storage, process feeding at ports, harbours, scrap-processing facilities, anywhere high-production handling of bulk materials is required, the E-Crane™ is suitable for heavy-duty production cycles and difficult working conditions such as loading and unloading ships and inland river barges. The E-Crane™ uses a hydraulic system instead of the cables that provide the lift in traditional cranes. It features an unprecedented reach of up to 150 feet, lifting capacities of over 30 US tons, push-down force equal to 50% of the rated capacity, and significantly reduced power consumption and operating costs. 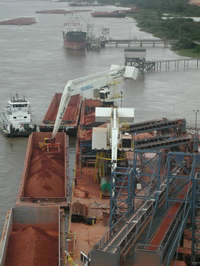 Unlike a conventional crane that requires up to 80% of its energy just to move, the E-Crane™ has to do substantially less work, so it needs a much smaller (and less expensive) motor to drive its hydraulics. It therefore handles about twice the coal with less than half the horsepower, resulting in significantly lower operating and maintenance costs. Simply put, the E-Crane™ is designed to move more material faster, farther, and for less money than conventional cranes

According to Mike Meace, GMS’s vice president of operations,“We have experienced a dramatic productivity improvement and really like the new crane a lot!… The new E-Crane™ has impressed everyone involved.” Last year the most productive day was 14 barges. However, due the to E-Crane’s 35 second cycle time, this improvement has allowed GMS to unload more than 18 barges in a single day, which is equivalent to 36,000 metric tons.

While the basic design of the E-Crane™ inherently keeps maintenance costs low, further thought was given to keeping the components simple and easy to maintain. This is best demonstrated by the fact that both counterweight and boom cylinders are identical, making spare parts inventories less costly. The power module is located in an easily accessible, walk-in compartment, making the use of ladders or scaffolding unnecessary. Low pressure hydraulics, oversize bearings, and an automatic lubrication system assure a long working life. The E-Crane™ utilizes only top-quality components supplied by leading manufacturers, such as Caterpillar cylinders and Rexroth joysticks, to ensure reliability and worldwide parts and service support.

E-Crane International USA of Bucyrus, Ohio, handled the sale, consulted on the specifications, and installed the E-Crane™. The company offers a complete material handling solution built around the E-Crane™. A family of standard models allows its engineers to tailor-make a machine for the particular needs of a customer while at the same time realizing the benefits of standard/series built components. The E-Crane™ is manufactured in Adegem, Belgium, by Indusign N.V. using US standard fittings. 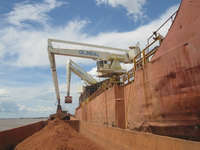