Our erection team (Jean-Marie, Luk, Guido and Hendrik) wants to thank the port management of Mälarhamnar for the perfect cooperation and support during the erection process. On behalf of the whole E-Crane™ organization we wish them many successful years and the best luck. 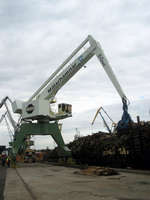 Cranedrivers Nicolas and Sam started to work with the E-Crane™ immediately after the commissioning as logs needed to be offloaded. Although the E-Crane™ was brand new it took these experienced crane-drivers only a few minutes to get confident with the operation of the machine. “Very impressive indeed and keep up the good work !!!”

Prior to start working with the crane an in-depth inspection and several load tests were carried out by DNV (Det Norske Veritas). Picture shows the E-Crane™ handling a testload of 17.000 kgs./37.400 lbs.

On a recent business trip with Mr. Kent Carlsson of Mälarhamnar, making a pre-delivery inspection of two MRS 4-rope grabs, Port-Trade sales manager Peter Muller learnt that the Port of Västerås was considering to upgrade their bulk handling capability.

A few weeks later Peter was asked to make suggestions as to how Mälarhamnar might fulfil the capacity increase and Peter, knowing that E-Crane™ had just supplied a new and bigger E-Crane™ to a Venezuelan customer and traded in an almost new type 11264 superstructure, suggested Mr. Carlsson have a closer look.

After an intensive group study, it was concluded that the E-Crane™ presented an excellent opportunity for Mälarhamnar and subsequent contract negotiations were concluded within a few weeks.

After overhaul and various modifications at the E-Crane™ factory in Adegem, Belgium, the superstructure will be moved to Västerås in August 2003 and will be fitted onto an existing rail mounted crane gantry.

The E-Crane™ will be delivered with three fully hydraulic MRS grabs:

Det Norske Veritas was involved in the project from the beginning and will certify the crane before it commences operation at the end of August 2003, handling a variety of bulk materials such as coal, ore, wood chips and logs.

The balancing counterweight compensates the boom weight and energy is only used to move the cargo, reducing energy consumption to only half of what common excavator type machines will consume. Maintenance requirements are similarly lower.

With its push down capability, the grabs will always fill completely. At the same time, cycle times are short and discharge rates will reach 5-700 tph with coal.

E-Cranes are standard engineered to A8 crane-classification, resulting in longer life and lower lifetime cost.

The E-Crane™ standard superstructure will fit onto a variety of carriages: pedestal, crawler, rubber-tyred or, as is the case in Västerås, onto an existing gantry.